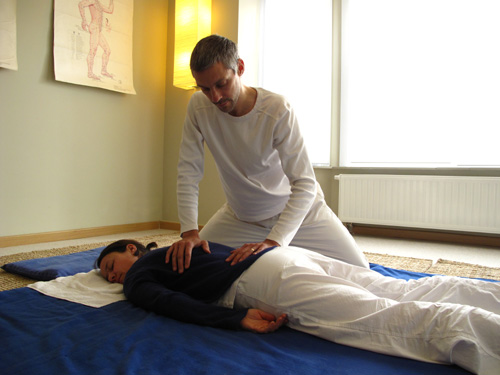 During a Shiatsu treatment you lie on a comfortable mat dressed on your belly, back or side. The practitioner applies with his hands, thumbs, elbows or knees pressure to the surface of the body and the different muscular tissues under it to release tensions effectively by the principle of pressure and counter pressure. Joints are mobilized and loosened up and muscles are stretched and relaxed.

Typically for Shiatsu is that always the whole body is treated – or better: of the whole being, since we are much more than the physical body! -, and that this treatment happens always fluently and rhythmically. In this manner the symptoms of diseases are considered, but not declared to the centre of the treatment. The focus of Shiatsu is less directed on fighting the negative, but rather on strengthening the positive. The free flow of the own energy and the own immune and regenerative systems are harmonized and supported. Symptoms of diseases lose their necessity and fade away.

Even if this description may have depicted the practitioner in a pretty active manner, being is much more important than doing. “Action in inaction” is an expression in Shiatsu. There is no mechanical “working” of the body. Consciousness, awareness and empathy are important cornerstones of every treatment.

Each Shiatsu treatment is unique and is an unusual opportunity to meet one self. This encounter opens new perspectives regarding the inner and the outer world.

After a Shiatsu treatment quite often one feels like after a very deep, refreshing sleep or after returning from an inspiring journey into another and yet very well-known world.

Here you find some feedback from clients after a Shiatsu treatment.

… and is a holistic form of body work, which was formulated under various influences of the Traditional Chinese Medicine (TCM), Japanese forms of body therapy and Western physiotherapeutic techniques. Therefore, Shiatsu treatments consists of a wide range of different elements.

In Japan, Shiatsu is a firmly established form of therapeutic treatment, and also in Europe Shiatsu becomes more and more popular because it’s holistic approach quite often helps to ease of remove condictions of suffering and sickness.

Shiatsu is based on the ancient, validated system of the Meridians, used also in Acupuncture. Meridians are the vessels through which our life force flows, called “Ki” in Japanese. Since our energetical and physical system are linked very closely, one informs about the other, and changes in one lead to changes in the other system. Shiatsu works with both systems simultaneously – and is therefore a powerful tool to face various imbalances on all levels of the human personality.

In Shiatsu, all physical, mental and emotional aspects of the human being are seen as various expressions of a specific pattern of the flow of ones life force. The used model is that of the five elements. You can see their chinese symbols at the top of this page: Wood, Fire, Earth, Metal and Water. The theory of the five elements can be seen as further differenciation of the more known model of Yin and Yang which describes the unity of all things by pairs of opposites like light-darkness, male-female etc.

Each of the five elements stands for a specific state of energy which manifests in the physical body, the mind etc. Imbalances like a lack or a overflow lead to certain expressions in all associated fields, which we finally face as symptoms of a disease.

Each element is connected to various physical and psychic functions in the system; each is e.g. related to inner organs, a body tissue, a sense organ, an emotion, a state of mind, certain body regions etc. Therefore, the Shiatsu therapist can discover connections where under pure symptomatic point of view only separate effects are seen.

The natural state of each individual is that of health, balance, and the own body has the tendency and also the ability to come back to this state. However, due to inner or outer influences, imbalances, states of depletion and blockages can arise which are easiest faced with an outer influence which leads back to balance. A Shiatsu treatment is such an influence.

Read more about the connection of Yoga and Shiatsu.